Does anyone know if the Cupra gets the Electronic engine sound actuator that the ID.3 has ?

I must admit, I have never heard it..

A quick look through the manual and I have answered my own question..

Still not heard it though, has anyone ? 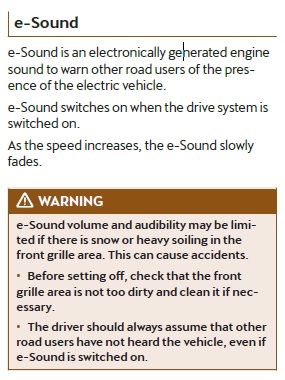 Yes. Bear in mind I have age related hearing loss but I posted on this when I looked at my car in the showroom. Sales guy could hear what I heard which is low frequency noise almost like a rough fan in the background . Tried 2 other Borns and they all did the same. Sales guy said it was louder outside the vehicle.
What I tend to hear is lower frequency noise. It probably sounds totally different and louder to someone with a normal hearing range.
Born V2-Tech L collected June 22
BMW Z4 e89 sDrive30i Highline
BMW Z4 e85 3.0i SE
Top

I've heard it, wouldn't describe it as an engine noise - more like a UFO or the humming noise that Iron Man's repulsors make when they're charging up in the Marvel films (but not discharging). As long as a deibel threshold is met, i'd imagine any fake engine noise could be employed if VAG allowed it to be outputted, a beefy V8, a farty Harley Davidson, or maybe a Chinnook helicopter?

As it doesn't sound like an ICE car, i'm not sure how useful it is for pedestrians - they're more likely to look to wonder what it is, after hearing an unidentifiable sound rather than a sound they associate with a car or specifically a BEV.
2022 V2 E-Boost, L-Tech Pack - Glacial White
2022 V2 E-Boost L-Tech Pack - Aurora Blue
Octopus referral: https://share.octopus.energy/lush-fawn-565
Top

I've always thought it would be great to have a car that sounded like Dr Who's Tardis arriving.
Especially if you could turn it on just as you crept up on a cyclist!
Born V3, Aurora Blue, Tech (M) pack, Firestorm wheels, Pano roof
Ordered 21 June, 2022, delivered 17 Jan 2023
Top

I have my new Born for a day and I thought how cool the motor sound was. So it turns out it is electronically generated? Hopefully, we will be able to change this to other sounds in the future.
Top

Or switch it off even
Top

alanjs wrote: ↑
Mon Jul 18, 2022 9:03 am
I've always thought it would be great to have a car that sounded like Dr Who's Tardis arriving.
Especially if you could turn it on just as you crept up on a cyclist!

The good thing (and fun thing) about EV’s is that this is all new and, just as ICE’s, people will find a way to customize and personalize their cars to no end:). Just the beginning, folks

Our CUPRA Born Forums are free to join and open to all.